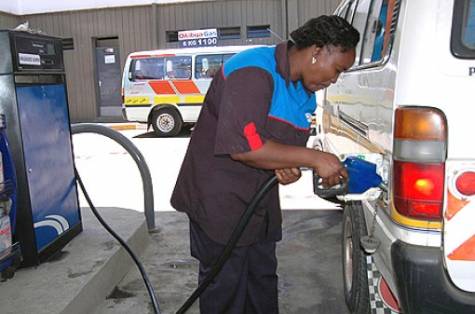 A sum of N1. 149, 385 trillion is estimated to go into the payment of subsidy on petrol imported into the country this year. With the provision of a mere $1 billion, which is about N305 billion in the 2019 budget year, the country may run into a massive budget deficit if nothing is done about the development.

The breakdown shows that at the prevailing $2.54 per gallon of fuel in the United States, which translates to N774.7 at the official exchange rate of N305 to $1, a litre of petrol in the country costs N193.68 on the average. Going by the last pricing template released in 2018 by the Petroleum Products Pricing Regulatory Agency (PPPRA), additional cost elements of N14.3 per litre is required to cover the retailers’ margin, bridging fund, dealers’ cost and transporters’ pay.

Thus the landing cost of petrol in the country currently is N207.98. This implies that government currently pays N62.98 subsidy per litre of petrol. The Nigeria National Petroleum Corporation (NNPC), which has since deployed subsidy as part of its operational costs, as the last resort of supply line as enshrined in the NNPC Act 1977, defrays an estimated N3.149b per day under what is tagged “under-recovery.”

With the NNPC playing the role of the sole importer of petrol into the country and adopting the “under recovery” approach, the PPPRA no longer processes payments of subsidy, but its officials are still present at the ports to ascertain how many litres the NNPC is bringing in. The takeover of the processing of subsidy payment led many to conclude that the NNPC has usurped the function of the PPPRA, but Apollo insisted that the NNPC has not taken over PPPRA’s responsibilities, stressing that both organisations are working together to ensure a smooth distribution of petroleum products.

Apollo, who had, in an earlier statement explained that the Petroleum Support Fund ended in December 2015, added that the scheme has been managed by the PPPRA since May 2016. “Under the scheme,” the statement explained, “the agency regulates petroleum products supply and distribution through the issuance of Quantity Notification (QN) and LAYCAN to NNPC and Oil Marketing Companies (OMCs). It also monitors discharges at various facilities nationwide.”

Before now, the PPPRA generated data that is used by the Ministry of Finance to back up payment claims by marketers, before they were paid by the Central Bank of Nigeria (CBN). The Group General Manager, Group Public Affairs Division of the NNPC, Ndu Nghamadu, promised to provide more details on the subject, but failed to do so as at the time of filing this report.

However, while there is no evidence of abuse of the process, there is total absence of any back-end channel that is empowered to verify NNPC claims.

Meanwhile, there is disquiet in the PPPRA as both the executive secretary of the agency, Abdulkadir Umar Saidu, and board chairman, Muhammadu Buba, are seen as “NNPC boys” that were sent to preside over the demise of the PPPRA, and possibly put the career of the workers at risk. The PPPRA staff members are indeed apprehensive that the current situation may jeopardise their jobs.

According to The Guardian, Buba is a former managing director of Pipeline and Products Marketing Company (PPMC), a subsidiary of the NNPC. The reversal of the sale of the nation’s refineries by the administration of Olusegun Obasanjo, by the Musa Yar’Adua-led administration paved the way for the collapse to the liberalisation of the downstream sector.

A source explained: “The cancellation of the sale of the refineries by Yar’Adua’s administration led Nigeria to the present situation. The administration adopted a populism system of government in a capitalist economy. That was wrong. I think what would have been adopted by that government was “welfarism” as adopted by the late sage, Obafemi Awolowo. The sale of the refineries would have put Nigeria’s economy on a sustainable path. This is the same mistake the current administration is making.”

Principal Consultant to the National Assembly on Oil and Gas Industry Reform, Dr Francis Adigwe, warned that the current subsidy regime is not sustainable, saying government must exit a regulated downstream sector.

His words: “Government needs to liberalise the downstream sector. Nigeria has an oil and gas industry that will not grow as long as government continues to subsidise products. The importation ensures the value-added that will provide employment and rejuvenate the economy is completely lost.”

Dr Adigwe also dismissed as false, the belief that the Dangote Refinery, which is still under construction will sell petroleum products at subsidised rate saying, “nobody should look at the Dangote Refinery as a company that will sell products to Nigeria at a discounted rate. Yes, government will not have to pay for product transportation, which will likely lead to some reduction, which could be very marginal.”

Stakeholders in the oil and gas sector, yesterday, insisted that the continued payment of subsidy on petroleum products and the secrecy surrounding the situation could cripple the nation’s economy.

The experts, who said that Nigerians deserve an explanation for the alleged hijack of PPPRA’s functions by the NNPC, noted that the prevailing situation was an inefficient way of supporting the poor as the greatest beneficiaries. The PPPRA was established by an Act of the National Assembly in 2003 as an autonomous agency to primarily determine the pricing policy of petroleum products and regulate their supply and distribution. It was designed to report to the presidency, but the agency’s travails started under the Goodluck Jonathan-led administration when then Minister of Petroleum Resources, Diezani Alison-Madueke was in office.

While the Act that established the agency has not been repealed, most of its executive secretaries have reportedly been quiet order to avoid losing their jobs since those who wanted to run the organisation independently fell by the way side. A source familiar with the matter, who pleaded anonymity, told newsmen that in 2014, one of such executive secretaries, Reginald Stanley was removed and replaced immediately with Farouk Ahmed. His removal was linked to claims of no subsidy on kerosene at a point when Alison-Madueke had a deal with some operators.

Currently, the principal actors in the agency reportedly have direct working relationship with the NNPC. The Director, Centre for Petroleum, Energy Economics and Law (CPEEL), University of Ibadan, Professor Adeola Adenikinju, insisted that the continued payment of subsidy is adding to the plight of the masses instead of addressing their poverty.

According to him, the situation is unsustainable, provides more benefits to the rich and remains a barrier to economic development. Coupled with the secrecy that surrounds subsidy payment, Adenikinju stated that the situation has contributed immensely to the country’s poor local refining capacity.

“Let’s remove subsidy and come up with policies that affect the poor positively. There’s no compliance even if budgets are made for subsidy. It is not good for the economy”, he said.

On the purported hijack of the function of PPPRA, Adenikinju stated that unless the PIB is passed to clearly define roles of agencies, overlapping functions and manipulation of regulatory provisions could continue. “There are no set out laws, there is overlap and discretion. The PIB will put those things in order and set out the power of the boards. There is need for certainty,” he added.

He stressed further that there was the need for the country to ascertain its level of daily consumption of petrol, noting that the current figure being paddled by the government lacks veracity.

For the Chairman/CEO of International Energy Services (IES) Limited, Diran Fawibe, the country must take the bold step of stopping the payment of subsidy on petrol. Fawibe, who noted that subsidies on consumption remained unsustainable in the long run because of it economic and multiplier implications, added that the country’s refineries must be in working condition to address the importation of refined petroleum products.

“NNPC should be made to explain why the jobs of PPPRA were taken over; I believe that the NNPC would not want to do anything that undermines the rule of law, so it needs to speak out on the issue,” Fawibe noted.

On the level of consumption, he says there is the need for an independent analysis, adding that the current situation lacks objectivity. Partner, Odujinrin and Adefulu, Adeoye Adefulu noted that with NNPC being the only importer of fuel, PPPRA’s function of verifying subsidy claims is effectively redundant.

“Without the over/under recovery mechanism, it is doubtful that even the NNPC would be willing to import fuel. Nonetheless, without the check, questions would arise as to the veracity of the claims being made regarding the size of daily consumption of fuel. Ultimately, we would need to confront the subsidy question as a nation. We cannot keep dodging the issue,” he noted.

“The continued payment of subsidy by the government is unsustainable and anti-development because the opportunity cost of the money expended on subsidy is money that the government is unable to spend on health, education and infrastructure. Beyond these issues, there is also the question of the transparency of the process. The NNPC has effectively been forced to be the sole importer because the private sector does not have faith in government’s ability to pay subsidy as at when due. The over and under recovery method being utilised allows the NNPC to recover from crude proceeds its shortages from fuel importation,” he added.

In his contribution, Managing Partner, The Chancery Associates, Emeka Okwuosa says the current administration lacks credibility, especially in the light of current revelations on subsidy.

According to him, the level of fraud that was perpetrated during the Jonathan’s administration in subsidy payment has re-echoed under the current administration despite the anti-corruption and due process campaign by the government.

Okwuosa said: “The Buhari administration needs to immediately institute an investigation to confirm the authenticity of the report and stop subsidy forthwith.” He urged the presidency to take immediate action on the role of PPPRA that has been allegedly taken over.