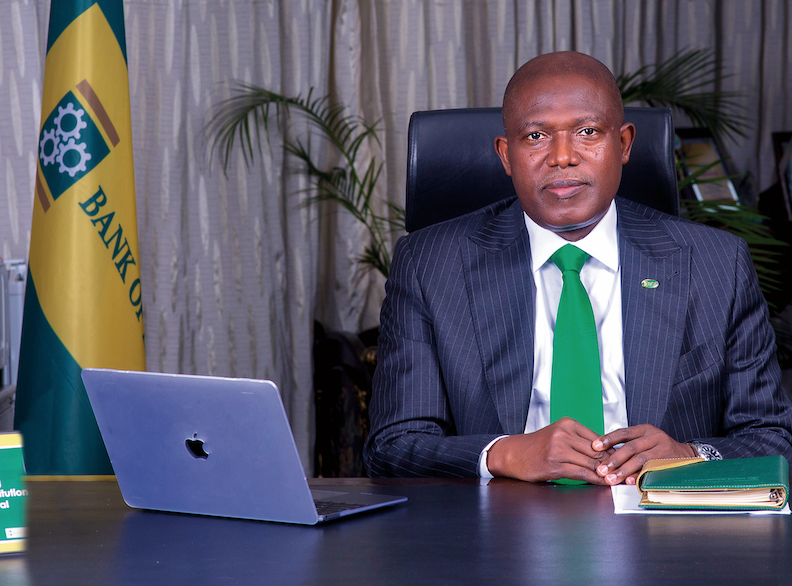 The Bank of Industry is Nigeria’s oldest and largest development bank. It celebrates its 60th anniversary this year and given the strides it has made over the past few years, there is every reason to believe it will achieve its centenary in due course. Anver Versi reviews the bank’s performance over the past year.

Olukayode Pitan, the Managing Director of Nigeria’s Bank of Industry (BOI), has now become accustomed to running an institution that has a serious development agenda. Under his leadership, the bank has charted a course that has led to spectacular and sustainable growth.

“BOI’s mission,” says Pitan with characteristic straightforwardness, “is to transform Nigeria’s industrial sector by stimulating entrepreneurship.” There lies the rub: the mission is as clear-cut as can be – the trick is in the implementation – the ‘how?’

“The bank does this by providing financial and business support services to enterprises in identified real and emerging sectors which are aligned to the broader national strategies such as the Economic Recovery and Growth Plan (ERGP),” says Pitan.

He explains that the enterprises the bank has supported over the years cut across several sectors ranging across agro-processing, creative industries, engineering and technology, fashion, renewable energy, healthcare, and pharmaceuticals.

In line with the government’s focus on economic diversification in the non-oil sector, BOI focuses on supporting the entire value chain of core and emerging economic sectors as outlined in the strategic plan. Sub-sectors that are given priority include agro-industries, textile and leather works, polymer-based industries, solid minerals, foundries, and ICT services.

Although the larger corporates garner all the business headlines and employ thousands, the backbone of any economy is the robustness of its small and medium scale enterprises (SMEs) as well as its micro enterprises.

Economic Vitality
Indeed, the SMEs and micro enterprises also add vitality to a country’s economy. By opening and spreading distribution channels throughout the nation, they connect the dots and provide millions of jobs.

“As the foremost development finance institution in Nigeria, we have come a long way in addressing our mandate, says Pitan. “There are about 40m MSMEs in Nigeria. We have supported thousands of enterprises, and have facilitated the creation of millions of jobs. However, there is still a lot to be done.

BOI’s presence across Nigeria is spread across state offices that operate in 24 out of the 36 states in Nigeria. It lends at concessionary rates to MSMEs through its partner commercial banks; and also to larger corporates, as long as they fulfill the criteria of driving job creation and developing the manufacturing sector in the country.

Overarching aim
The overarching aim is to support manufacturing activities that reduce the nation’s dependence on imports, that have backward linkages and which create employment.

What makes BOI’s intervention particularly welcome is that it lends at below the rate of inflation – “but this is for the areas that are identified that should be assisted for the good of the country generally,” Pitan points out.

Pitan also adds that one of his chief responsibilities is to make sure the bank is adequately funded.

“When I joined BOI, I quickly realised that there was a need for the bank to become financially sustainable by being self-funding, given the fact that government resources are limited and the financial requirements of the Nigerian industrial sector are huge,” he says.

“I am glad to say that we have made significant progress in this regard as we were able to raise about $1.5bn in a relatively short space of time.”

This includes a $750m syndicated loan facilitated by Afreximbank and 15 other international financial institutions; $200m from the Nigerian Content Development and Monitoring Board (NCDMB) for oil and gas businesses, $100m from the Africa Development Bank and an N100bn ($280m) Industrial Fund from the Central Bank of Nigeria.

The bank also recently signed an MoU with the Export-Import Bank of China for a $500m line of credit to fund modular refineries. “We are also in the process of finalising the conditions precedent to draw down on a $40m line of finance approved for the Bank from the Islamic Development Bank.

“Additionally, through our partnership with the Brazilian Development Bank (BNDES), the bank was granted a $20m line of credit to support financing the purchase of equipment manufactured in Brazil by Nigerian companies.”

Focus on light manufacturing
Pitan feels that one area that is being ignored in the public discourse is light manufacturing, which he believes is the engine for growth and which naturally supports and is supported by an ecosystem made up of SMEs.

This is one of the reasons why the bank embarks on projects such as the Partnership Agreement with All On to finance the Niger Delta Off-Grid Energy Fund. On works with partners to increase access to commercial energy products and services for under-served and un-served off-grid energy markets in Nigeria, with a special focus on the Niger Delta sources in Nigeria.

“The Niger Delta is one region that is significantly plagued by the energy gap, where the majority of the population reside in rural areas and only 34% have access to reliable grid power,” explains Pitan. As a result, SMEs and households use expensive and inefficient diesel and petrol generators, increasing their operational costs.

BOI and All On have responded by jointly creating an N1bn ($3m) Niger Delta Off-Grid Energy Fund to provide local currency debt financing towards the deployment of energy solutions. Both institutions are equal contributors to the fund, which BOI operates at favourable terms of a 10 percent interest rate per annum, one-year moratorium, and tenor of up to seven years.

Serious social investment
In addition to the hard finance aspect of being a development bank, BOI also takes its social investment responsibilities seriously. One example is through the Micro Enterprise Directorate (MED) of the bank, which focuses on the financially-excluded Nigerians.

“Irrespective of income level, all individuals, households, and businesses should be able to access financial products tailored to their needs and circumstances,” he says.

BOI achieves this through the Government Enterprise and Empowerment Programme (GEEP) which is a Federal Government social investment intervention to provide microcredit to market women and traders, artisans, enterprising youth, farmers and agricultural workers. These micro-entrepreneurs are able to access loans up to N100,000 ($277) without collateral.

BOI also provides similar loans directly to customers, who, as a result, are able to access a higher amount than what is obtainable under the GEEP scheme as long as they operate within a cooperative.

The bank has also developed the Youth Entrepreneurship Support Programme (YES-P) and the Graduate Entrepreneurship Fund (GEF) – and trained 14,000 youths in entrepreneurship and other business management modules. A total of N1.8bn ($5m) has also been disbursed to 726 beneficiaries under these programmes.

On the non-financial side, the bank provides capacity building and business advisory services such as online and in-class training on business management and entrepreneurship to youth prior to loan application under BOI Youth Programmes.

The Bank also has a partnership with over 200 Business Development Service Providers to support MSMEs in developing bankable business plans and it has set up a dedicated desk to support women-owned and led businesses.

So far, Olukayode Pitan, MD of BOI, has walked the tightrope with aplomb and seems to be eager for greater challenges. Given the central role this institution plays at the core of Nigeria’s manufacturing industry, it can justifiably claim to be the bank for all seasons.