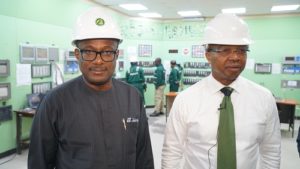 The Nigerian Content Development and Monitoring Board (NCDMB) will support Notore Chemical Industries Plc to fully develop its industrial complex so it could offer integrated services to oil and gas companies and increase its contributions to the agricultural and infrastructural sectors. The Executive Secretary NCDMB, Engineer Simbi Kesiye Wabote visited the company in Eleme, Rivers State recently and took extensive ground and aerial tour of the facilities.

He stated that the agro-allied, petrochemicals and power company had bigger potentials for industrialization, notably because it has natural gas resources, generates its own electricity and had recently been granted free trade zone status by the Federal Government. He added that the ample land mass and other natural assets also positioned the complex perfectly for hosting allied industries and serving as logistics base for key oil and gas operations.

He said: “This facility is just 15 kilometres to NLNG in Bonny, so there is potential to participate in the NLNG Train 7 project. There is vast land here, so you can also have accommodation for projects. This location could become a staging ground for most of the NLNG construction that would happen.”

Wabote suggested that the Notore’s facility could also be considered for the execution of SNEPCo’s Bonga-South West Aparo’s deep water project. ”That project would also happen and we are looking for draft and you have it here. There are potentials for ancillary factories that support the oil and gas sector.”
Recalling that the complex suffered poor management when it operated as National Fertilizer Company of Nigeria (NAFCON), Wabote commended the current management for revitalizing the assets and expressed delight that key operations of the fertilizer plant were being run by Nigerians.

He said: “All the people manning the operations are Nigerians. The feeling is unbelievable and this is what we talk about in NCDMB in terms of industrialization and the synergy we must build across sectors. This is one of those companies that are changing the face of Nigeria in terms of agriculture. What the company does and the impact to our economy is unbelievable.”

In his comments, the Group Chairman of Notore Chemical Plc, Mr. Onajite Paul Okoloko thanked the Executive Secretary for the visit and appreciation of the potentials that exists in the facility.

He explained that Notore’s assets straddled across the agricultural, oil and gas and infrastructural sectors and the management was working to build a second plant fertilizer plant, which would facilitate increased support to farmers with high yield fertilizers and best practices for more agricultural production.

Okoloko said the company was determined to build an industrial city and commercialize some of its assets, which includes the 560 hectares of land and two kilometres of water front. According to him, “the larger picture from one of our subsidiaries, Notore Industrial City is to create an industrial chemical estate. Our free trade zone is rated number 1 by PricewaterhouseCoopers in the sense that it has a deep river port, 10.5 meters of tradable draft, with direct access to the ocean. We also have 560 hectares of land and is the only free trade zone in the country that has gas and power.

“In our estate you can have fertilizer plants and petrochemicals because we have the gas infrastructure so you can use that as raw material. At the same time we have a logistics base that can support the oil and gas industry. So we have the logistics on one hand and the commercialization of gas which is being flared in the country, so this becomes a gas hub.”

He stated that the company would work with various stakeholders to ”optimize the location to create significant amount of industrialization which is key to the economic growth of the country and at the same time employ a huge amount of local skills to support the facility we have here.”