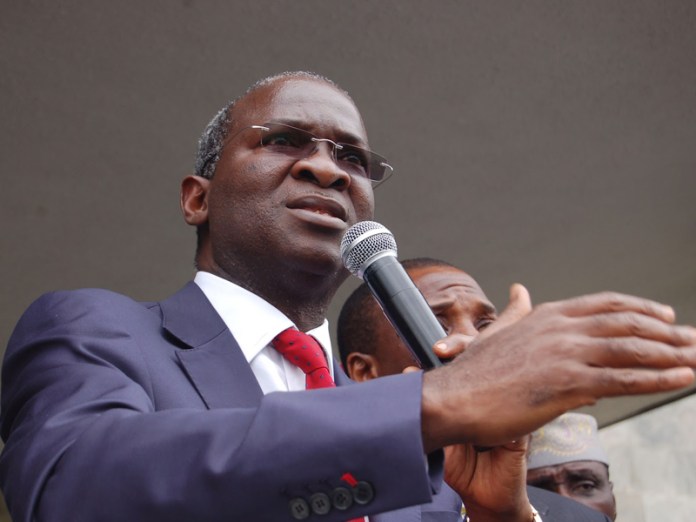 Minister of Power, Works and Housing, Mr. Babatunde Fashola
By Oke Peter
The Minister of Power, Works, and Housing, Mr. Babatunde Fashola, has disclosed that China has set finance the construction of a project that would become Nigeria’s largest hydro power plant – the 3,050 megawatts (MW) Mambilla plant – through an export-import financing model.
Fashola, who spoke on a national television on Monday, in Abuja, explained that Nigeria would shortly negotiate the terms of the financing framework with the Chinese.
He said the government was awaiting the office of the Attorney General of the Federation (AGF) to proceed with its negotiations for the finance of the project which he said would cost $5.72 billion to build.
“What we just did was to award the contract (Mambilla) for the first time in over four decades. The next phase is to go and negotiate the financing, as the Chinese have offered to fund it under an export-import financing arrangement where they will contribute 85 per cent of the financing and we will contribute 15 per cent,” Fashola, said in response to a question on the project’s financing details.
He further explained: “The negotiations for the finance is the next step after council award. Council is the organ of government that can award projects of that size – it is a $5.72 billion contract, we are waiting for the Attorney General’s office so that we can sign the contract within the next few days. With that contract, we can go into negotiations with the financiers.”
However, by its nature, export-import financing models which are usually concessional loans, have long moratorium of up to five years, in addition to long tenor that could be as long as 20 years, and very low interests of like two per cent as against the 17 per cent interest on government treasury bills which is one of the funding sources available to the government.
They noted that if it sails through, Nigerians would mostly provide and man the trucks for movement of materials to the project site, cook food for workers at the site, while materials such as sand, granites, cements and others would be sourced locally.
Already, Fashola in the interview noted that about 25 local insurance firms had indicated interests in providing insurance coverage for the project.
He stated in this regards, “we have received not less than 25 applications from insurance firms already, just hearing that we have signed Mambilla, they are saying they want to provide insurance for the project, and it is just going to give a lot of momentum to the Nigerian economy when the construction starts.”
The Mambilla power project according to Fashola had remained unattended to since 1972 when it was initiated, but would now be completed within six years.
Similarly, the minister disclosed that the next plan of the government for the Transmission Company of Nigeria (TCN) would be to hold on and run it as an efficient firm after an ongoing restructuring of the entity.
His assertions on TCN suggested that government was not considering a fresh management contract or concession arrangement for the transmission network.
“The plans of government in summary is to make the TCN a very effective corporate organisation that discharges its responsibilities and plays its roles in the power value chain.
“The contracts that were inherited with the management consultant has expired, we have appointed an interim managing director whose mandate is to prepare a management structure review of TCN. He is an employee of the company on secondment from the African Development Bank (AfDB).
“His mandate during a short period – he has a six months period to do this, and then make recommendations to government as to what to do, after which we will reappoint a new managing director, the management team and the board of the company and charge it to do what it should do,” Fashola said.
He then added: “Ultimately, we expect to see a very rich mix of private sector skill brought in to merge with the experience that is clearly in TCN, because most of the people, especially at senior management have a history of these transmission assets, how they were built, where they are located, and I think a proper mix of that with a clear governance, rules of engagements will give you a more efficient company.
“At that stage it, it will be a government undertaking managed by the very best hands that we can find.”