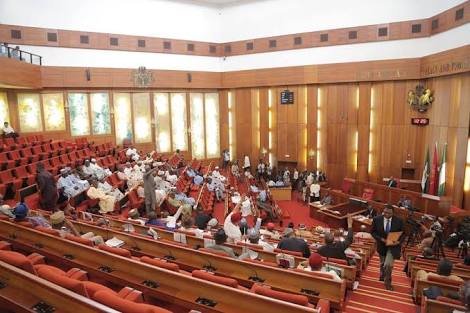 *A plenary session of the Senate on Thursday.

The Senate Committee on Petroleum (Downstream) headed by Senstor Kabiru Marafa on Thursday, announced its resumption from the end of year recess by summoning the Minister of State for Petromeum, Dr. Ibe Kachikwu and the Group Managing Director of the Nigerian National.Petroleum Corporations (NNPC) Dr. Maikanti Baru.A statement by Senator Marafa on Thursday said: “Members of the Senate Committee on Petroleum (Downstream) have cut short their Christmas/New Year break to address the lingering fuel scarcity in the country.“To this effect, the Committee has invited the Minister of State for Petroleum, Dr. lbe Kachikwu and the Group Managing Director (GMD) of the Nigerian National Petroleum Corporation, Dr. Maikanti Baru.“The Minister and the GMD are to appear before the committee on Thursday, 4th January, 2018 to explain the measures so far taken to end the fuel scarcity in the country. The session would be aired live on NTA to enable Nigerians have a first-hand information on the measures taken by the Ministry and the NNPC to end the lingering fuel scarcity that has bedeviled the country in the last few weeks.“it would be recalled that the Committee had before the recess, embarked on a nationwide tour of petrol stations in some parts of the country.“The Committee regrets the hardship the scarcity has exposed motorists and the general public to, and urged for more patience as new strategies are being mapped out to end the scarcity for the benefit of all.”