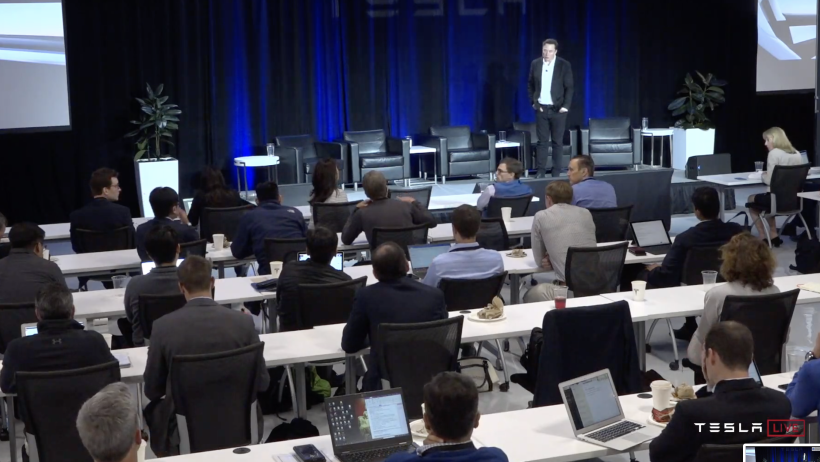 Elon Musk stood up in front of a room of investors today (April 22) to announce the era of the self-driving car had arrived—at least for Tesla.

At “Autonomy Investor Day,” the Tesla Chief Executive Officer (CEO) said it had developed its own self-driving chip designed specifically for Tesla vehicles, and it would launch a “robo-taxi” service for owners of autonomous cars to pick up paying passengers.

It’s all part of an updated master plan. While Tesla’s first roadmap was to build a sports cars, then a more affordable car, and finally a mass-market vehicle (today’s Model 3). Musk now has autonomy on the top of his list (not to mention a semi-truck, pick-up track, solar roofs, and massive expansion of manufacturing capacity—some of which are months, or years late).

Musk says he plans to have a “feature-complete” self-driving Tesla on the road by 2019 (with the full suite of hardware and software needed for autonomous driving) and then a robo-taxi program by 2020. There are many reasons to be skeptical: For those who remember Tesla’s 2016 blog post, “All Tesla Cars Being Produced Now Have Full Self-Driving Hardware,” this will sound familiar. The company later admitted it would need to replace hardware and software for owners who had bought the “full self-driving” package. Several deaths have also been linked to (paywall) fully or partially autonomous vehicles. Waymo (pdf) and Tesla have slowed ambitious timelines for rolling out their driverless technology.

This time for real
Tesla’s hardware engineering lead and former Apple chip executive Peter Bannon said at the event this was Tesla’s first custom chip, and that a second-generation chip that’s still in development, roughly two years away, would be multiple times better.

Musk said the new hardware was “not best by a small margin, best by a huge margin,” and any competitors were at least three years behind. He also bashed rivals’ reliance on laser sensors (like Lidar) and maps, calling them crutches to achieve autonomy, compared to Tesla’s approach of using computer vision software, along with cheaper radar and infrared sensors.

Experts say Musk is jumping the gun. “In Tesla’s case, a significant reliance on computer vision introduces an extra level of difficulty,” Bart Selman, professor of computer science at Cornell University, told Quartz over email. “It is well-known that current computer vision systems can fail in quite unpredictable ways. Having multiple sensors, ideally, including Lidar, are therefore critical.”

For now, Tesla and the industry’s unsolved challenge is still “sensor fusion,” merging streams of data from multiple sensors into a coherent plan of action without humans.

But the day gave Musk a chance to do what he does best: display a sleek, exciting vision of the future (even if it’s still years away, at best). The slide presentations were sharp. Several shiny Model 3s were available for attendees to test drive. It was only during deeper questioning that the holes in Musk’s presentation came into focus as his answers descended into platitudes.

When asked about the likelihood of regulators approving Tesla’s robo-taxis, Musk said he was confident the data would speak for itself. “When you present the data, [regulators] always come to the right conclusion,” he said putting a lot of confidence in a regulatory process that has barely even begun. Another investor asked about who would be liable in the event of an accident by one of the Teslas in the robo-taxi program. “Probably Tesla,” Musk answered, hesitantly. “I think the right thing to do is to make sure there are very very few accidents.”